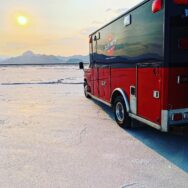 Firstly the Bonneville Salt Flats has a long history. I can only scratch the surface of all that salt in Bonneville-Salt-Flats-Bob Davis Podcast 1064.

Secondly I have wanted to come to Bonneville since I was a kid.

Above all in those days my favorite car magazines almost always featured something happening at the Bonneville Salt Flats.

For me there was certainly an attraction to the famous muscle cars of the 60’s and 70’s.

But I loved those Kodachrome photos from back in the day.

Not A Car Guy

Most importantly I am not a car guy.

However I still appreciate this automotive history of the Bonneville Salt Flats.

Indeed the person the Salt Flats are named after never saw them.

In addition even the famous Donner-Reed party’s ill fated travels to California included an episode with the Salt Flats.

Later William Randolph Hearst got the publicity ball rolling back around 1910.

Subsequently racing didn’t take on the flat until the early 1930’s.

In the long run The Bonneville Salt Flats glory was the early 1960’s through the early 1970’s.

When all those iconic records were set.

Unquestionably the Salt Flats are still a huge attraction.

In due time they all take their pick up trucks and sedans for a speed run.

Even more the obligatory selfie and then it’s time to go.

Presently though you don’t see too many hot rods.