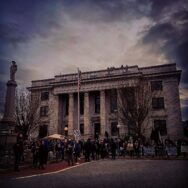 Another good one. Enjoying the nomad travels! We have a monument to a common confederate soldier about 40′ high in the town square in Franklin, TN (where we moved to six years ago). As a native MN, it always puzzled me how the South has deals with civil war. You were right on in this one. We have had our own for and against protests all summer and fall, but he still stands, and it doesn’t appear to be going away anytime soon. They city and county are adding new markers to discuss Black history and have plans for other statues to put in the square (there once was a market house in the square, so it’s got a lot of history).