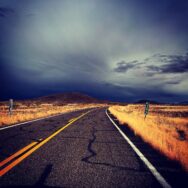 Firstly holiday season means many avoid travel restrictions with a road trip so it’s a perfect time for a nomad meetup and New Mexico is the place. Join us for Nomad-Meetup-New-Mexico-Bob Davis Podcast 973.

Secondly Las Cruces New Mexico turned out to be the perfect place.

Don works in the oil fields in Midland, Texas and lives in Case Grande, Arizona.

Even more my old radio buddy works two weeks on, and gets a week off.

Certainly like a lot of other workers these days no one’s taking any risks. Therefore Don is not alone migrating from the job, down the I-10 and back again at least twice a month.

On the other hand I am thoroughly loving the whole nomad experience. Having spent the last week or so in New Mexico, it was easy for me to head to Las Cruces.

Therefore my friend and I could meetup in Mobile Podcast Command for some coffee, and conversation.

As a result we got to share stories of the road and life’s challenges.

Above all how do we deal with issues like where we park at truck stops or Walmart parking lots. What about showers. Food. Do we travel at night or during the day?

In addition why do guys do what we do? For Don it’s about feeding a family and doing what has to be done.

But for me it’s about the open road and pure freedom.

Most importantly in this time lots of people are on the road.

Whether they’re working in one city and commuting to another or hitting the road in the same vein as I am, it doesn’t matter.

Finally even though it seems foreign, strange or even scary to some…It’s home to us.

To sum up we both get a lot of questions about life on the road. Time for a freewheeling conversation with two road warriors about what it’s like, why we do it and why we love it. 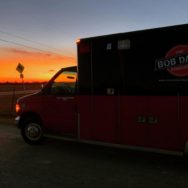 Sometimes an eclipse is just an eclipse. Friday’s ‘Blood Moon Lunar Eclipse‘ did not destroy the world as predicted. These days someone needs to keep track of the soothsayers! We’ll talk about it in World Survives Eclipse-Western Wisconsin Road Trip-Podcast 742.

On a desolate lake road in Western Wisconsin at midnight, in the full moonlight, one wonders whether any of that matters anyway! What’s more the silence here in the middle of nowhere is incredible.

No Rules No Prep

I took a short road trip to what we like to call “God’s Country” to talk about organic farming. I’ll take that up in the next podcast. Every now and then I have to do walk and talk podcasts. No rules. No Prep. I call these ‘consolidation podcasts’.

A Midnight Walk Is Good For Making Sense Of It All

Because things seem to happen so frequently, following the news can be a head spinner. I do these walk and talk podcasts, usually at midnight, to try to make sense of it all.

Furthermore last week the boomers were predicting the end of the world after the big eclipse. On top of that we are whipsawed by reactive coverage of the news. Getting subscribers and listeners to the Bob Davis Podcasts on track at the beginning of the week is one of my missions.

Most noteworthy for this podcast is the release of the new economic data. 4.1 percent GDP growth in a single quarter is not unprecedented or even historic. It is good news. The key here is what caused the growth? Moreover is the growth sustainable?

In conclusion this week you may hear a lot of chatter about the economic numbers. Due to partisanship equal amount of chatter passing for ‘analysis’ will be negative and positive. Above all listeners wonder what to look for to find information without partisanship.

Sometimes you find a little bit of truth on a quiet country road in the mist and moonlight!