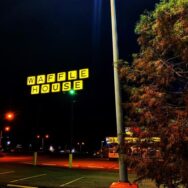 Firstly I have not been eating a lot since I hit the road. Time to join me live at the table in Waffle-House-Carb-Fest-Bob Davis Podcast 969.

Secondly I did not know I was starving myself until I got dizzy.

Eating On The Road

Consequently this is a great opportunity for a podcast about eating on the road.

Smothered In Butter and Syrup

Certainly I was surprised to realize I was eating only protein and not very much of it at that.

Smoothie In The Morning – Steak At Night

For example a protein smoothie in the morning, energy bar at noon, and steak for dinner in the Walmart parking lot.

Pulling The Belt In!

Above all not a lot of carbs. Yes I lost weight. Yes I had to buy a new belt. But that’s good, right?

Meanwhile people keep asking me questions about life on the road.

Where do you stay? What about RV Parks?

I see a lot of nomads posting great pics of the Grand Canyon on Instagram and Facebook. Or great hikes in the Great Smoky Mountains.

I have a few pics of me on a beach. However I am more of a truck stop, Walmart parking lot guy.

Work. Travel. Sleep. Do It Again.

For example pull into the truck stop and go to work on a podcast, or blog. Post it. Sleep. Get up and do it all over again.

In the same vein I’ve certainly stayed at National Parks. In this podcast I highlight a Boondock on an abandoned beach in a National Park.

But I love me a Walmart parking lot. I can get ice and a laundry bag the next day.

Even more I am not above a one skillet meal in a truck stop parking lot, with the cook stove on the back of Mobile Podcast Command. A lot of people show off their luxurious vegan meals. One skillet lends itself to bacon and eggs.

Hash Browns Save The Day

But every now and then you need hash browns, a waffle, and some toast.

Finally, my approach to nomad life isn’t for everyone but I think it’s better than touring antique shops and backing the Prevost into a 77 dollar a night RV Park ‘campsite’.