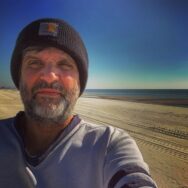 Most important Gulfcoast Winter BeachLife can get cold. But it’s still a lot better than winter in Minnesota. Learn more in Gulfcoast-Winter-BeachLife-Bob Davis Podcast 970.

Secondly I’ve passed through warm and cold weather. Spent some cold nights on the beach.

Even more there’s a lot of hurricane damage down here. A lot.

However there is a lot to like about some of the beaches and beach towns along the way.

For example my favorite Texas beach down is Port Aransas. I’m camped out on a beautiful beach. When I did Gulfcoast-Winter-BeachLife-Bob Davis Podcast 970, it was in the 80’s and sunny.

Sand Storm On The Beach

On the other hand that night there was a lot of wind. There were sand drifts around Mobile Podcast Command in the morning and it got pretty good.

Getting Stuck At Matagorda

In the same vein, I got stuck on another one of my favorite beaches but managed to get myself unstuck.

In short no no single beach remains the same from one visit to the next.

Above all the biggest challenge I still face is taking my time.

Certainly I am capable of driving hundreds of miles a day. I’ve done it before.

On the other hand hundreds of miles a day is not really what the nomad experience is all about.

For instance I don’t have to ‘go home’.

Moreover while I have a loose schedule there’s no hurry.

In conclusion the life lessons just keep coming in this effort. Join me on the beach to talk about the experience so far and hear the next objectives in Gulfcoast-Winter-BeachLife-Bob Davis Podcast 970.

Sponsored by Inspire and Flourish Texas. That’s all you need to say. Texas. We start on the Texas Gulf Coast at Galveston and work our way up to Beaumont, Houston, on through central Texas with an eye toward La Grange, Austin, Waco and finally to Dallas. If you woke up in one of these places, even any of the smaller towns along the way, you would know, you could only be in Texas. Along the way, lots of stories from this Road Trip so far, including the drive up the Gulf Coast through Mississippi and Alabama, and Louisiana, ending in New Orleans on Saturday night, where Mobile Podcast Command was forced to break the law, in service of a cup of chicory coffee and a pastry from Cafe Dumonde. Sadly, New Orleans seems like it is still struggling to overcome the effects of Katrina, which is probably why there are suddenly so many parking restrictions, and the parking authorities so vigilant. So out of character for this ‘anything goes’ town. In Mississippi, you pass the beautiful home of the president of the confederacy Jefferson Davis, and one can only wonder what it must have been like to leave this gorgeous home on the beach, move to a place like Richmond, to ‘run the confederacy’; a really bad decision in the long run. Did he ever make it back? Then the gulf coast, with its brand new ‘towns on stilts’…literally the houses, the stores, the cafes are all built on pylons, to withstand floods and perhaps the intense winds of hurricanes, which come every year. The Bolivar Peninsula, and Galveston where I finally found the deserted coast line I have been looking for. Finally central Texas including Houston and finally Dallas. Both of these cities are juggernauts on their own. When you combine Houston and Dallas with San Antonio, Austin and the western Texas cities, you begin to understand why this state is so important, and why it is unlike any other. Sponsored by Hydrus and Ryan Plumbing and Heating of Saint Paul.