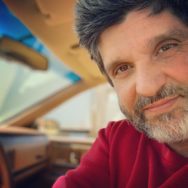 I don’t think I’m a car guy but now I bought a Buick! Certainly I love cars. Even more I know who to talk to about cars. Recently I bought a car my dad would have loved. Time to talk about my 1996 Buick Roadmaster with my friend Ken Madden in Dad-I-Bought-A-Buick-Bob Davis Podcast 923.

Escape From The Crazy With An Old School Cruiser

These days any distraction from the crazy is a good thing, right? That’s why when I had the opportunity to buy one of those ‘woody wagon‘ mid nineties cars, I jumped.

Even more this one sat in a pole barn for ten years and has only about seventy thousand original miles.

In a most noteworthy outcome I learned this car is not only a collectors item. This Buick is in high demand.

Certainly this is as good a time as any to introduce podcast subscribers and listeners to a guy who’s driven these old V8 sedans and wagons for a long time.

From mid seventies Plymouth’s to Oldsmobile’s, Lincoln’s, Chevy’s and Buick’s, Ken Madden has owned, driven and wrecked more than his share of these big old American Beasts.

Especially relevant? These cars evoke powerful emotional memories for both of us. Find out why in Dad-I-Bought-A-Buick-Bob Davis Podcast 923. We need that nostalgia right about now.

Our dads preferred buying used cars. My dad would negotiate for a used Pontiac, Chevy or Buick until he’d pushed the sales guy over the edge. Ken’s dad did the same thing with Plymouth’s and Mercury’s.

Clyde Barrow and The Chicago Gangsters And Their V8’s

Finally we devote a little time in this podcast to talking about the history of these big cars going back to the 1930’s. We also talk about their demise because of fuel standards in the 2000’s.

I still have Mobile Podcast Command, a 2000 Ford Super Duty Diesel Ambulance. For sure keeping my 2007 Crown Victoria Police Car a little longer.

Now I’m That Guy Down The Block

In conclusion every neighborhood has one. The guy on the block with a bunch of old cars. That’s certainly the Maddens. Apparently I am now that guy too.

Sponsored by AuntieBRentals and Ryan Plumbing and Heating of Saint Paul