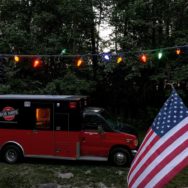 You don’t often get a July Fourth, Fireworks and an Eclipse all rolled together these days. Let’s enjoy it together in July-Fourth-Fireworks-Eclipse-Radio-Bob Davis Podcast 938.

Firstly it seems to me like the scolds have ruined yet another holiday.

What used to be an oasis of fun has been turned into a tedious history lesson.

Do Your Own Research

Secondly do your own research about our glorious or tawdry past. I’m certainly not going to waste your time.

Leaving The History Lessons Out This Year

Most importantly I leave the history lessons out in July-Fourth-Fireworks-Eclipse-Radio-Bob Davis Podcast 938.

Certainly I’ll share a few facts about the 1700’s. That’s about it.

However I think it’s more fun to share some stories of fourths I remember as a kid. Even more fun to do it while the eclipse gets rolling and the kids shoot fireworks in the park.

For example for some reason I seem to remember all the wonderful cars from back in the day in my stories. Giant hunks of American Steel.

In addition those backyard parties with my grandfather’s sales guys.

Truth is to a kid, everything is bigger than life. Especially the smells. Martinis. Beer. Coffee. Cigarettes. Cigars. Even Perfume.

Finally it sure seems to me like reminiscing is better therapy in today’s world, than bitching and moaning about interpretations of the signing of the declaration. Besides, those guys in the park have fireworks!

Nothing More American Than A Perfect Summer Night!

To sum up don’t forget! A perfect summer night. Fireworks. An eclipse. The entire neighborhood partying.

(Editor’s Note: Yes I do refer to the American Colonies circa 1776 as ‘The United States’. My mistake, but perhaps understandable considering the amount of fireworks in the background. Obviously we did not become These United States until after the ratification of the US Constitution in 1788, and the Bill of Rights later in 1790.)

What could be more American than that?