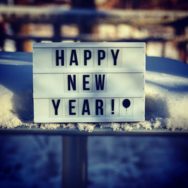 I don’t do resolutions. First of all, these days everything has a ‘best practices‘ guide. Second I do two things on the New Year. I thank the people who meant the most, let the year go and move on. We’ll do that in Resolution-Free-New-Year-Gratitude-Bob Davis Podcast 889.

Above all each year seems to have a theme in my experience. Moreover 2019 was more of a slog than a dance. I think that’s true for most people.

A lot of friends and clients went above and beyond this year. Consequently I’ll use this podcast as an opportunity to show my gratitude to all of them.

In addition this is my tenth year podcasting. I was an early adopter when it came to podcasting. I find it hard to believe I have managed almost one thousand podcasts, all with sponsors.

Certainly creative businesses are tough rows to hoe. These days running a creative enterprise can feel like walking around in the dark trying to find the light switch. Learn more in Resolution-Free-New-Year-Gratitude-Bob Davis Podcast 889.

Furthermore the people who have contributed to the Bob Davis Podcasts really deserve special mention. I often say that those contributions can often be the difference between not eating and eating, when I am on the road.

A Shift Away From Day To Day Politics

It’s most noteworthy that this year marks a decided shift away from day to day politics and this podcast.

I think all of us get tired of day to day arguments that lead nowhere.

Above all travel and yoga have helped to make that transition.