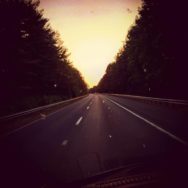 Late Night Live. After a day that started in West Texas, chillin’ at Scottsdale’s Chop and Wok where they were kind enough to provide water, and WIFI. This is one instance where pulling up in a huge vehicle with ‘The Bob Davis Podcasts’ emblazoned all over it, paid off. If you have seen the Mobile Podcast Command Vehicle traveling across the US, send us an email and say hello, and thanks for finding the Bob Davis Podcasts. After an introduction, live, from the Chop and Wok, this podcast features a montage of the day’s travel, starting in West Texas, and ending up on the ‘Road Less Traveled’ between I40, and Payson, Arizona at sunset. What do you do when your phone quits in a small town in Western Oklahoma? And what about the food at Truck Stops. Is it possible for someone to create the first ‘Farm to Table’ truck stop? Why not? This podcast happily, includes absolutely nothing about politics. It’s all just travel, and the crazy thoughts that come with it. From Farm to Table truck stops to Zane Grey! Starting in Eastern Texas, ending up in the mountains around Payson, Arizona in one day, with a lot of observations and questions along the way. Don’t forget New Mexico, land of enchantment, either. Sponsored by Baklund R & D.