Firstly if you’ve ever been stuck in the sand you know the meaning of Trials Tribulations and if you’re lucky Victory. Learn more in Trials-Tribulations-Victory-Bob Davis Podcast 1053.

Secondly it happened to me just a few weeks ago. Now it was someone else’s turn.

And it was my turn to help.

Certainly there are no guarantees in this story.

But sometimes three people have all they need to solve a problem.

With a little extra help.

Amazed At The Bonds Of Nomads

Above all I am amazed at the bond nomads have.

Even more the bond I witnessed that our armed services veterans have.

Most importantly it’s all here in Trials-Tribulations-Victory-Bob Davis Podcast 1053.

Forgotten How To Work Together

I think one our biggest problems these says has to do with the fact that we all seemed to have forgotten how to work together and stay with a problem long enough to see some kind of progress.

Help From Above Too

In addition when you put in the effort sometimes you get a little unexpected help from above.

I was willing to step up. As a result I learned something.

On the other hand I certainly wasn’t the one who wouldn’t quit. I got help in that regard from my friends.

And another nomad camper with a Skoolie.

However the idea of refusing to quit and being willing with stay with it was reinforced due to this experience.

Land Of The Nomad

Subsequently there was a lot of talk among us about how these experiences are much more the norm out in the land of the nomad than back home.

In the same vein it’s one of the great things about nomad life.

In short we’re always ready to step up to help and share if we can.

Lessons To Be Applied Elsewhere

Finally I think those same lessons can be applies to the greater question of our national future.

That is to say working together.

Sponsored by Be You Enterprises 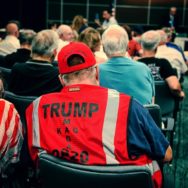