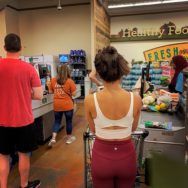 Business Networking for Growth and Friendship

Most noteworthy is the disclaimer at the beginning of this podcast. One of the things I do not do is sell interviews in my podcasts. I sell personal endorsement advertisements in my podcasts.

Recently as a prize at our networking group I gave away a podcast interview. John won that interview, and also happens to be a client. All the better for Fitness Together, right?

Even more John has a great story about his journey to becoming a fitness business owner. Furthermore his family’s hometown is also my family’s hometown. Plus I have my own fitness favorite, Yoga. Learn more here.

Certainly having one of my networking partners as a guest on the podcast is key. Moreover John shares some great observations about the Fitness Industry, his journey and the future of fitness.

John has been in the fitness industry for a long time. As a result he lays claim to being among the first generation of professional fitness trainers. We’ll talk about the odyssey of fitness, from the first boxing gyms, to the big box gyms of today and especially the kind of focused personalized training Fitness Together provides in Fitness-Future-Business-Networking-Bob Davis Podcast 866.

Finally we share some personal stories about the value of business networking for small businesses. For me, the opportunity to talk with other small business owners who have different life experiences and personalities is very important.

Fitness Has Become A Big Industry

In conclusion, fitness in general has grown to be a huge industry. What’s the future of Fitness?

From DNA Testing to focus nutrition to Yoga, Power Lifting, CrossFit and more. Welcome to the first monthly yoga podcast as part of The Bob Davis Podcasts. Through all the news and current events podcasts over the years, yoga has been a behind the scenes commitment. In First Official Bob Davis Yoga Podcast-Podcast 663, we’ll talk exclusively the practice.

First and foremost I will be forever a student. There are many yoga podcasts about teaching, nutrition and the poses. Not many about the experience of the student. The first podcast in this series then has to be about my history. How I came to Yoga. How I came to integrate it into my day to day life.

The Bob Davis Podcasts have done podcasts about Yoga or about people who practice Yoga and the links for those shows are here. Yoga has been a part of my travel podcasts. Where I practice. What Yoga is like in one town versus another on the road. It’s time now to spend some time focusing on the practice. We’ll start doing this once per month. The first podcast in this series is here.

It’s All About Growth

Like many people I came to fitness later in life. I came to yoga later in life, starting at the gym. You grow tentatively, in fits and starts, until you find a daily practice. For me it was Bikram. Now I do all kinds of yoga, practicing every day. Get the details in First Official Bob Davis Yoga Podcast-Podcast 663.

Don’t Even Notice The Heat Anymore

This podcast covers what it’s like to start ‘hot’ style Yoga, not knowing anything about any of it. For the people (like me) who practice ‘everydamnday‘, how that works, and the effects. The so called promises of Yoga. In First Official Bob Davis Yoga Podcast-Podcast 663.

I wouldn’t begin to tell people what kind of Yoga they ‘should’ do. Wouldn’t begin to make suggestions about what kind of nutritional guidelines one ‘should’ follow. There’s a certain level of humility that is a result of this practice. A approach different from talking about news and current events that is, for me, refreshing. Join me in First Official Bob Davis Yoga Podcast-Podcast 663.