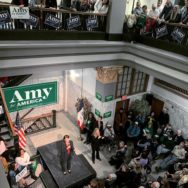 First of all US Senators are the jury in the Impeachment trial of the president. Or so some of them say. So weekends in Iowa are for campaigning. Learn more in Election2020-Amy-Klobuchar-DesMoines-Bob Davis Podcast 896.

Moreover these podcasts give listeners a sense of how candidates are interacting with potential caucus goers.

Especially relevant? Klobuchar’s status as a senior Senator and moderate Democrat, running in a field of progressives.

She calls herself a ‘practical progressive‘.

Certainly politicians talk a lot. Some of these events seem to go on forever.

Editing and Accurate Representation of Events

Due to this circumstance I have to edit. Hopefully these podcasts will be accurate representations of these events.

Taking You Inside Events So wear Headphones

Above all the effort is to take you inside an event so you can experience it. In addition with shorter length podcasts you’ll get an impression of as many candidates as I can record before caucus night!

Trump Is A Big Part Of Campaign

Seems like all the democratic candidates want to talk about the impeachment. They all talk a lot about the President.

Because of this republican leaning listeners and Trumpers may find it difficult to listen all the way through.

However one of my takeaways already is the depth of democrat arguments and the detail of their proposed agendas, should they become president. Even more the level of organization I am seeing here.

Finally republicans and Trumpers would be well advised to listen to these arguments and ideas.

In conclusion one thing is sure to be a factor in 2020. Democrats are targeting pivot counties here in Iowa in preparation for a national strategy along those lines later in the campaigns.

Testing Ideas and Arguments For Campaigning This Fall

Therefore it might be a good idea to hear and understand the arguments they’ll use.

Some of them are pretty good. 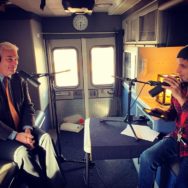