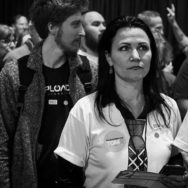 New York Primary Results. The results of the New York Presidential Primary are in. Now sit back and watch the story lines change. Surprise! After a day of voter confusion and typical New York statements from election officials about investigations, the New York Primary Results are in. Donald Trump won roughly 60 percent of the Republican votes, and Hillary Clinton managed about 57 percent of the Democratic votes in a slightly closer race. The most interesting outcome of this presidential preference poll is which republican candidate came in second. While Trump celebrates a win large enough for him to control a lion’s share of the delegates from the Empire State, Ohio Governor John Kasich ran a good second, and Texas Senator Ted Cruz came in a distant third, which should be enough to change the media story lines from ‘Ted Cruz is posing a strong challenge to Trump’, to whether or not John Kasich could be the nominee for the republicans in a contested republican convention this summer. The next primaries favor Trump and especially Kasich. Connecticut, Delaware, Maryland, Pennsylvania and Rhode Island will hold primaries on April 26th. While most analysts expect Trump to win most of the delegates, many will be keeping a close eye on Kasich. Is the republican establishment working for Trump opponents in states that favor them? Recent polls from Wisconsin suggest that might be true. More establishment figures as well as candidates seem to be pointing toward a contested convention. With the establishment concerned about the so called ‘down-ticket’; the US Senate and House, chances are Trump and Cruz — who don’t poll well against Hillary Clinton or Bernie Sanders in a head to head match ups — may not be able to get the nomination if they can’t get the required 1237 majority of delegates on the first ballot. This is the main thing to pay attention to in the next few weeks. Ignore the pundits and the exit poll nonsense and focus on the next spate of primaries. Finally, the New York Times reports voters ‘disillusioned’ by primary races that depend on delegate elections, not the popular vote. Are they being sidelined or were voters always sidelined in these state primaries and caucuses? Sponsored by Brush Studio and X Government Cars.