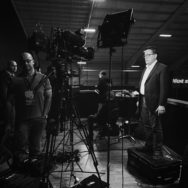 These days our minds are the new battleground. To fight back we have to be our own reporters. I’ll tell you how to do that in How-To-Be-Your-Own-Reporter-Bob Davis Podcast 915.

It’s especially relevant to point out politicians and so called leaders lie. If it’s Monday, they lie. If their lips are moving they are lying.

Any decent reporter starts with being skeptical when it comes to those who wield power. From there it’s all about checking details and establishing fact. Why? Because we live in a world where the information channels are filled with crap. Moreover, it’s on purpose.

In addition most so called ‘news sources’ these days are thin on resources. Newspapers have cut their newsroom staffs. Television networks don’t always fact check. More importantly cable news is all about personalities and arguments.

We All Have Blind Spots

Most noteworthy are the biases we all come to the table with. We all have blind spots when it comes to the ‘leaders’ we think are ‘doing a good job’. That’s how they use us.

What We Want To Hear

Even more most of us want to hear what we agree with. We want to feel secure in our beliefs and conclusions. Consequently we gravitate to the sources, stories and personalities we agree with.

Get Rid Of The Blind Spots

Above all if you really want to understand what’s going on you have to work on getting rid of the blind spots.

How I Lost My Blind Spots

Certainly I’ll tell you how I lost my blind spots in How-To-Be-Your-Own-Reporter-Bob Davis Podcast 915.

Similarly I’ll give you some pointers on how to use your devices to run down sources, determine biases and establish facts.

I Do Not Advocate

Finally, it’s my policy and the policy of my podcasts not to advocate for or against issues. I don’t fight for politicians. I am not financed by political donors.

Furthermore the longer I do this the more I believe we have to work with the facts we know we can confirm. Conspiracy theories and opinions are fun. Horoscopes and psychics are for entertainment only, right?

Not Fighting To Convince You

In conclusion I’ve given up trying to convince listeners and subscribers. I don’t fight for or against a politician.

Some Stories And How To Do Your Homework

I’ll tell you some stories and help you become your own reporter in this extra extra podcast.

(Editor’s Note: I do this all the time, I talk about someone off the cuff, and get the name wrong. In this case I refer to a certain Doctor Redmond at the CDC. It’s Doctor Robert R. Redfield, recently in the news with the Coronavirus crsis response.)