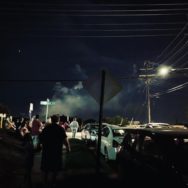 Gone Girl. “Gone Girl” is the movie everyone is going to see these days. The new movie has an unexpected story line about The Media. Did the writer(s), director and producer(s) know they were making a movie about media’s effects on our society? Or did they think – as many contemporary commentators think – the movie is about rape and murder? In a movie about a crime, you never see the inside of a courtroom, a prosecutor or Grand Jury. Even the lawyer acts like a Public Relations man. The ‘case’ is tried in the court of the media, and the media can be manipulated if you are smart enough and have enough money. It doesn’t matter how you become famous, only that you are. Notoriety can make you enough money to pay smart expensive lawyers and PR people who can ‘manage’, ‘spin’, ‘lie’ and create a story line. What ‘Gone Girl’ really says is there are two realities in our society; two separate spheres. There is a fantasy world created by the media where there is no right or wrong, no up or down, right or left, and no absolutes. Everything can be adjusted, walked back, changed, realigned and consequences are dependent on how savvy the protagonist, or victim is when it comes to media. Then there is in fact, the real world. A world where real things happen to real people. A world where hostages heads are cut off, where people get diseases and die, where policy decisions result in catastrophe, where airstrikes alone don’t stop the enemy, where the economy doesn’t get much better, where real people are worried and afraid. In one world people react to things said on television, magazines, talk radio, newspapers, social media and blogs. In the other world, real people act, and there are real consequences. Which world are you living in? Right now media coverage of the 2014 election cycle clearly illustrates the existence of these two worlds. If you’re running for office you’re supposed to follow the majority party’s playbook. Questioning US Border Security, asking whether there should be some kind of quarantine in place for West African arrivals to the US, questioning whether the President is protected, questioning whether the economy is ‘recovering’ is ‘alarmism’, or spreading ‘fear’. On November 4th, 2014 a very real thing will take place. There will be an election, and real people will go to their polling place and vote. One side will win the right to govern and the other side will lose. As the opposition party in the current US Government, republican candidates have a duty to question the competence and leadership of the president and his party, in any language they choose. In one world questioning the competence of our leaders is not acceptable. In the other, it’s essential. Sponsored by X Government Cars and Depotstar.