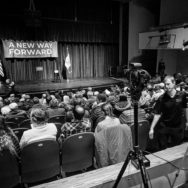 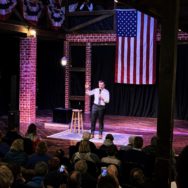 First of all I don’t think too many people can pronounce his name. Since he’s the former Mayor of South Bend a simple ‘Mayor Pete’ will do. Check it out in Election2020-Pete-Buttigieg-Jefferson-Iowa-Bob Davis-Podcast-898.

Certainly all the candidates are feverishly campaigning. It’s just hours until caucus time here in Iowa. Pete Buttigieg is no exception.

Running All Over Iowa

I’m running into familiar faces. Going from from Fairfield to Cedar Rapids and Iowa City. Then back to DesMoines. Out to Council Bluffs or Sioux City. Reporters. Digital Media people. Campaign workers.

Furthermore candidates and staff are tired. As I noted on the podcast with Tom Steyer, some of the candidates like to talk.

Pulled Together and Concise

Therefore it’s unusual for a candidate to do a presentation that’s concise. Even more, starting and ending on time.

Get In, Get Back Out

Moreover Buttigieg engages an audience of students, young volunteers and Jefferson residents sparingly. Hitting the issues. Answering questions. Taking selfies. Heading out to the next event.

Not Much Editing With Pete

The mission of these podcasts is to faithfully recreate the event. Due to this I often have to do a lot of editing. Not with Mayor Pete. As a result I can say Election2020-Pete-Buttigieg-Jefferson-Iowa-Bob Davis-Podcast-898 really does take you inside an event.

Finally I find it necessary to again state that my democrat friends will enjoy this podcast a lot more than my republican friends.

Put On Headphones. Walk Through The Event

Democrats can use these podcasts to make their caucus decisions. Republicans might want to hear what democrats are actually saying in 2020, rather than accepting what someone else says their saying. Shootings. Hurricanes. Earthquakes. Floods. Lots of talk about what happened. Not much talk about the actual experience of death. That’s because Death isn’t easy to talk about. I do in Tragedy Coverage Social Taboo-Talk About Death-Podcast 668.

Check your social media feed. Turn on TV. Listen to the radio. There’s an avalanche of talk about the events surrounding a tragedy. What happened? How did this happen? Can it be prevented from happening again? From comedians to news reporters, it’s mostly people trying to remain relevant.

Nobody Talks About Death

In all of the coverage no one wants to talk about the experience of death. Death as a concept. The reality of death. Fact is, we live with death and we have an experience called death. However, we don’t ever talk about it. Death as a subject is not okay. In Tragedy Coverage Social Taboo-Talk About Death-Podcast 668.

Death is the total and permanent cessation of the vital functions of an organism. We don’t really want to talk about that so we find other things to talk about. How do we deal with the shock of the unexpected, unexplainable and irreversible?

We Don’t Know How It Feels

Why do we grieve the death of the famous and barely pay a second thought to the deaths of hundreds in an earthquake in some other land? How is that different from how we react when someone really close to us dies? Talk about it in Tragedy Coverage Social Taboo-Talk About Death-Podcast 668,

Sharing My Experiences Of Death

In this podcast I share my own experiences. How I reacted to recent deaths of people very close to me. People who died unexpectedly.  This is in the hope that subscribers and listeners might think about and share their own stories and their own experiences with death. This is not easy to do. Talk about this is not a judgement.

We’re All Gonna Get There

Sooner or later we’re all going to have the death experience. Seems like everyone has different ideas about what actually happens. Death remains the great mystery for all of us. When you talk about death you have to talk about life. Do we regard life with the same wonder? Is life the same amazing mystery to us? Why not?